So to continue with our non sequitur How I Met Your Mother homage, we started our morning off by going to McGee’s Pub close to Central Park.  If you are not familiar with this place, it is the inspiration for the pub MacLaren’s pub from the popular CBS show. The writers for the show: Carter Bays and Craig Thomas came often to this pub after work on the Letterman show. 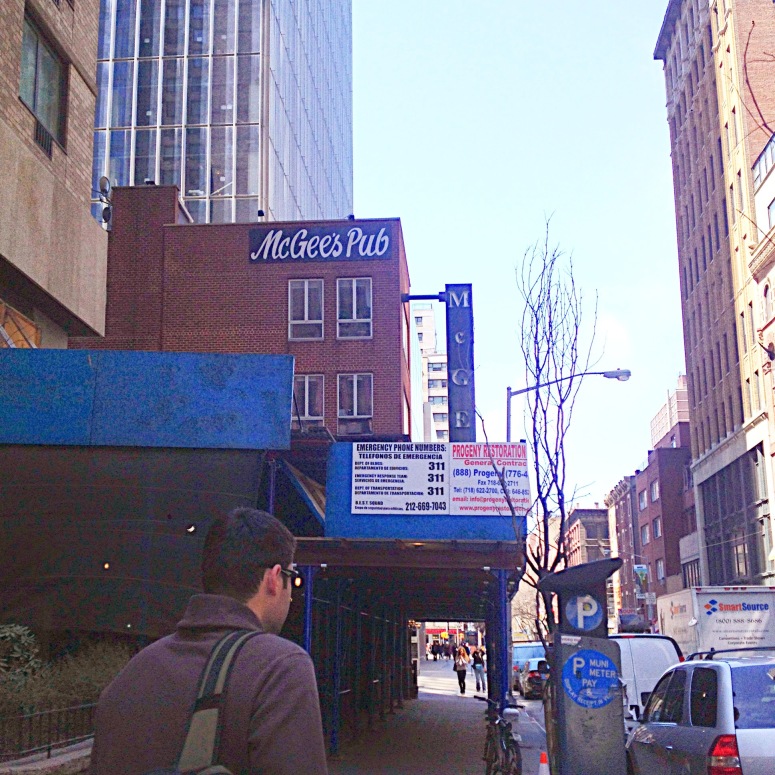 I will say this: it does not look the same as the show. Don’t get disappointed, the way MacLaren’s is set up in the show is made to be filmed……McGee’s is much more enclosed and would make for hard filming. It’s nothing extraordinary. It’s a typical Irish-American bar, but you can’t ignore the fact that it is very dear to the hearts of the writers so it does have importance and the bar knows it.

They have some HIMYM swag: 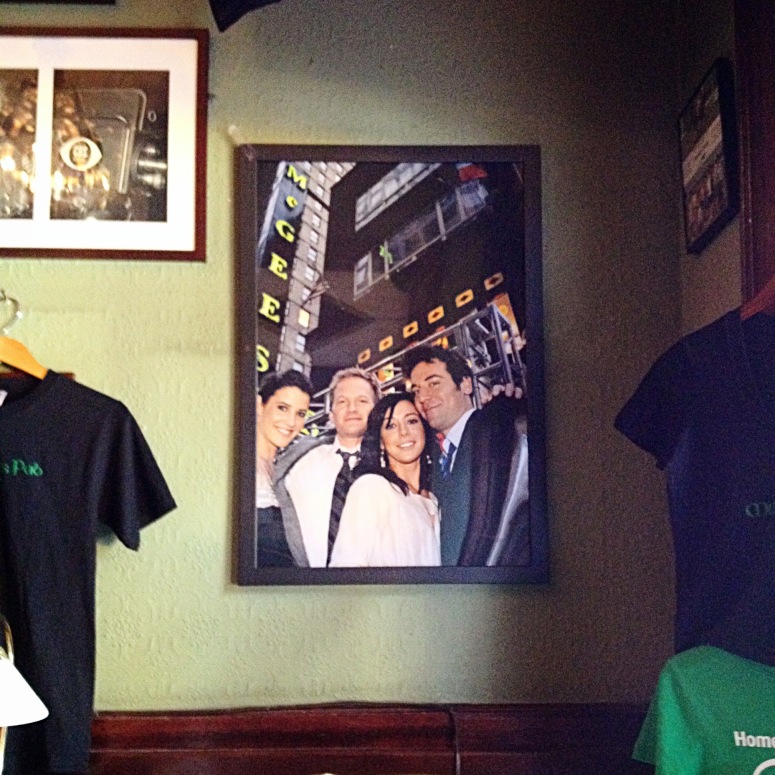 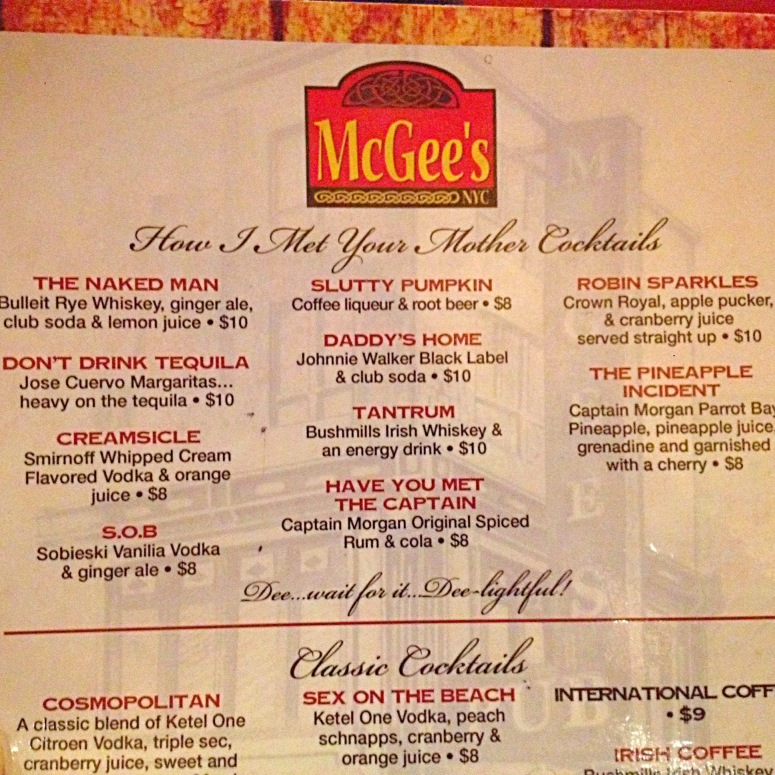 There was also a nice little message from Sherbatsky in the ladies’ room: 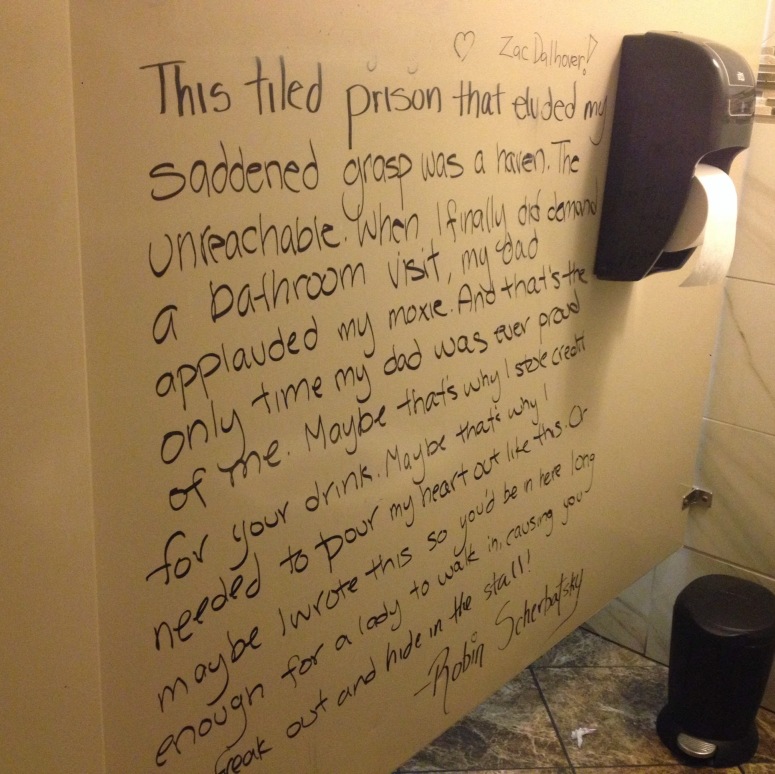 Once we had our ‘breakfast,’ we began the long trek down 8th Avenue towards Chelsea Market (we walked from McGee’s on 55th Street all the way to 16th Street and 9th Avenue). We did a little shopping here and there, I saw this little gem: 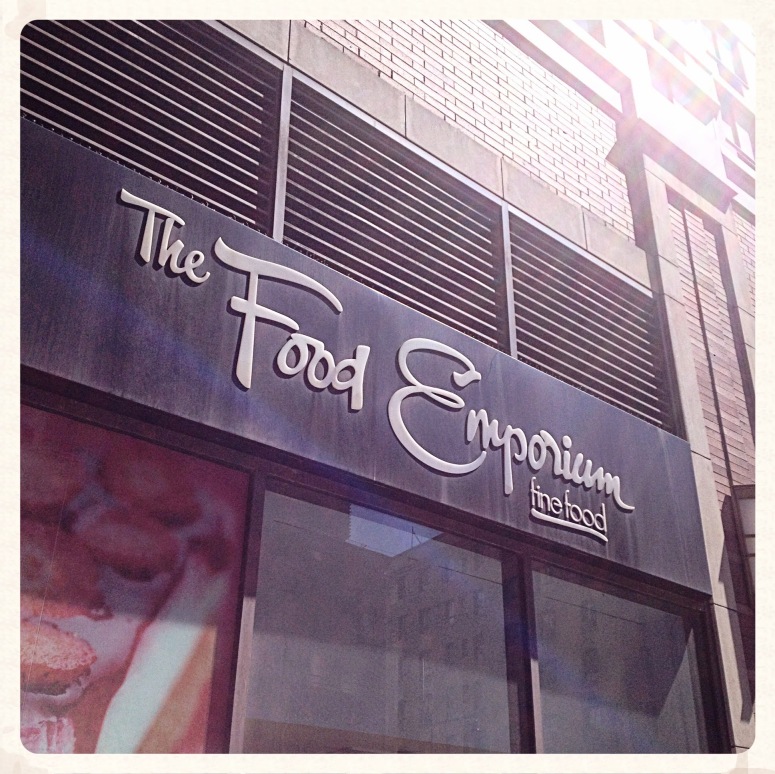 Then we finally made it! 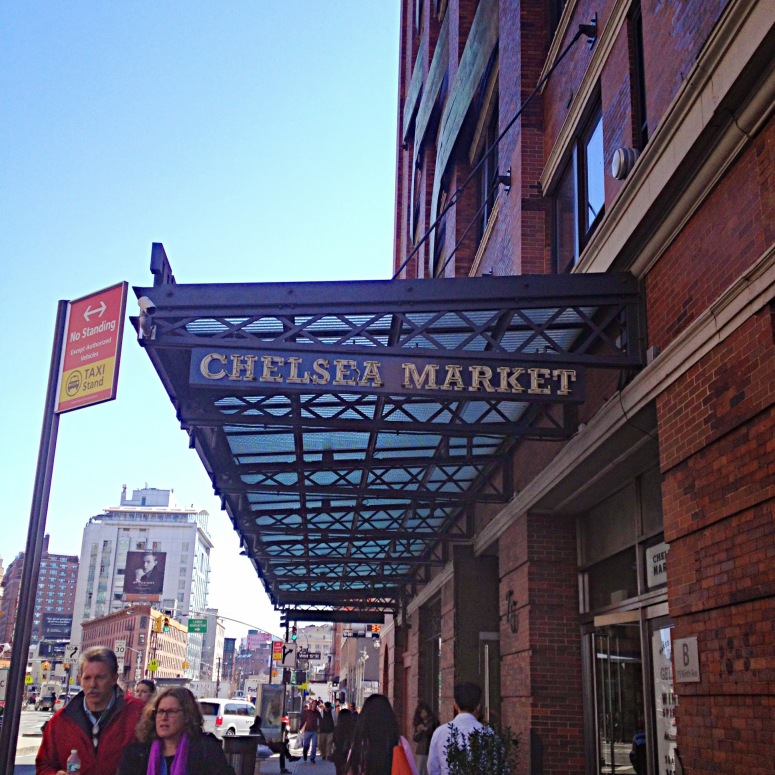 Thorsten fell in love with the design: the mix of worn and weathered backdrop against the more new and modern stores. In a way, it is very European since our neighbors across the pond aren’t as quick to tear down old buildings as we Americans are. 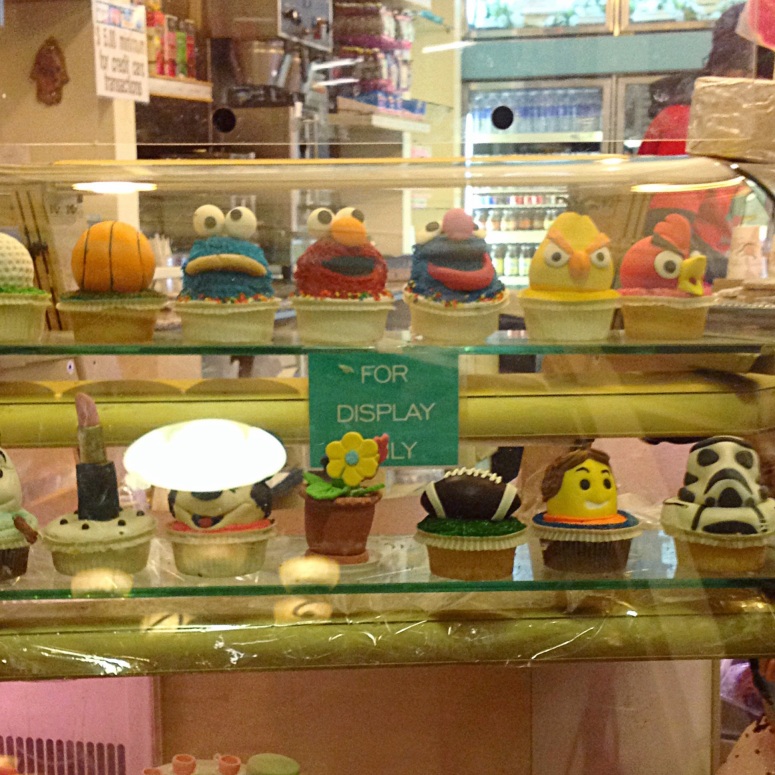 Just on the other side of Chelsea Market is the new High Line. 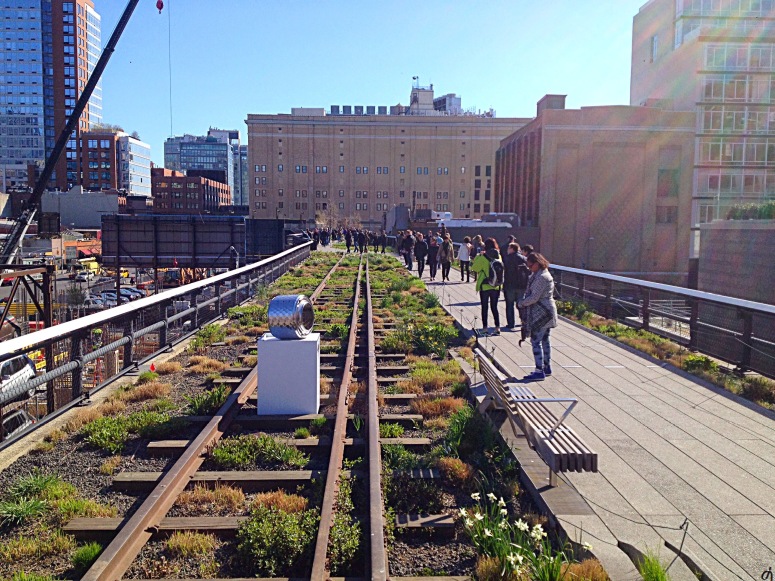 This is a new gem to the Big Apple. They took old railways that have been left to ruin and made them to an elevated park. It’s absolutely gorgeous and a clever way to bring a little green to the concrete jungle.

Unfortunately, we could not stay long. We had dinner plans with Maggie and Keith all the way on 51st (Vynl – quaint little restaurant). We wanted to have a quick visit and food with them before we walked around the corner to see our off-Broadway show: Avenue Q 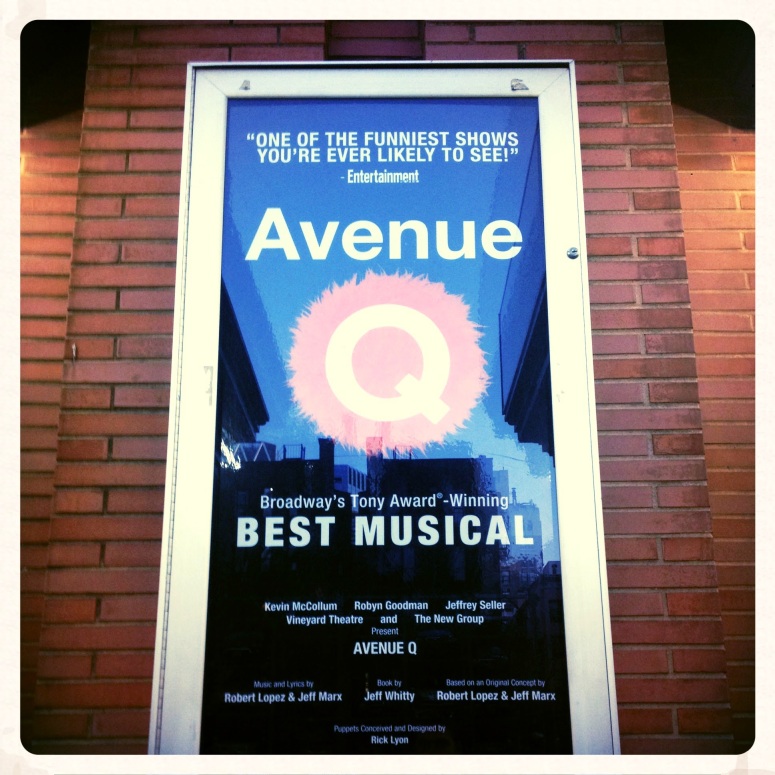 I have always wanted to see Avenue Q since I was in high school. Whenever I tried explaining the premise to people, I simply say that it is like Sesame Street but for adults. How so? 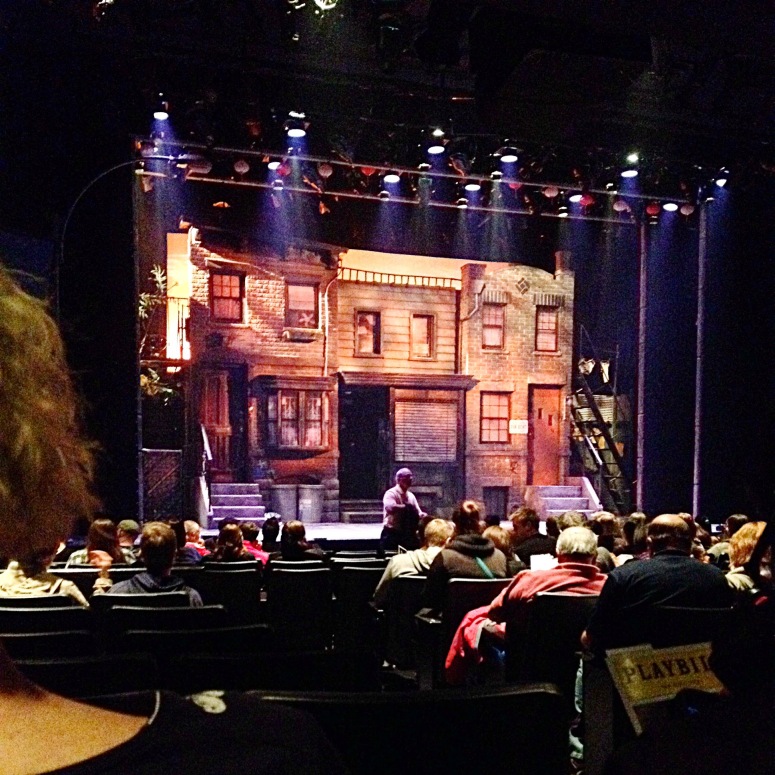 It’s hilarious. These actors imitate the similar child-like tunes of Sesame Street but teach us different lessons like “Everyone’s a Little Bit Racist” and “Schadenfreude.” If you like humor that borders on offensive then I highly recommend it.

On another note, we tried a new way of getting tickets. The last time I saw a Broadway show (Aida back in 2003); we took the conventional route of standing in line at the TKTS booth in Times Square. Now there’s an app for that! But I decided to also try another app that appeared to have good reviews: Today Tix We were able to get our tickets, choose the area where we wanted to sit (maybe not exact seats) and await confirmation. How it works: the small team (of about 12 or so) of Today Tix will actually go to the theatre and stand in line for you to get the tickets. Within three hours, they’ll get the tickets and you are good to go. However, if those three hours have passed and they can’t get them then they will not only let you know, but they won’t charge you. Once you have confirmation, you will meet the Today Tix person at the theatre about 30 minutes before curtain. In the confirmation e-mail they actually send you a photo of that person in front of the theatre you will be meeting them. When we arrived, we spotted our guy easily as he was wearing his bright red Today Tix sweatshirt. We had to show ID to make sure my name fit what order, we did a little survey, got the tickets and we were ready to go. I really liked this app and I will definitely use it again. Avenue Q did not appear on the TKTS app but it did appear on the Today Tix so I was very happy!

Overall, it was an awesome end to our New York trip. I am glad that we hit everything on our list but man were we exhausted by the end! I’ll miss you New York!

What about the rest of your travelers out there? What are your favorite sights in the Big Apple?