This last weekend, Thorsten and I attended the wedding of his friend Jürgen to a beautiful woman named Susanne.  It was a beautifully planned affair that lasted most of the day (the church ceremony started at 11:30 and we didn’t get to bed until 4 the next morning).

First, Thorsten and I worked hard at making our present for the newly weds.  It is customary in Germany to give money but you can’t just throw money in a card. No, you have to make an effort and be creative.  So we were:

Thorsten bought an olive tree and we made origami butterflies out of Euro notes.  I made the card and wrote what we wanted to say (of course with the help of Thorsten because my grammar sucks!) 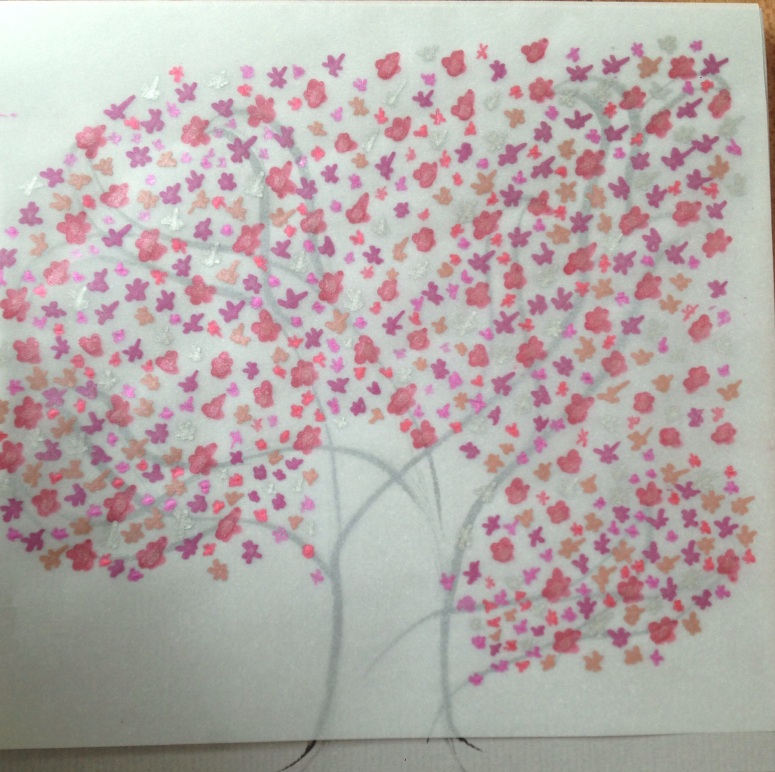 You’ll have to trust me on the text; it looked very nice.  The image was my attempt at a cherry blossom tree.

Then we were dressed and ready and made our way to the next village over, Brettheim, for the ceremony: 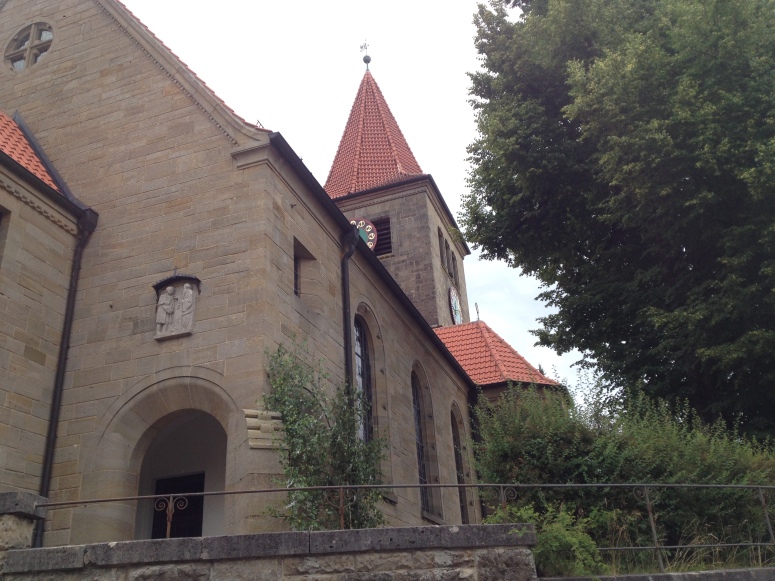 As you may have noticed that compared to my cousin Beto’s wedding: there are no photos taken during the ceremony.  Honestly, I prefer this.  Afterwards, we all exited the same door where were greeted by a long procession of people (they were really there for the couple).  They were the various groups that both Jürgen and Susanne belong too: Jürgen’s soccer team, Susanne’s martial arts team, members of Jürgen’s construction company and Susanne’s students (she teaches elementary school).

Thorsten and I didn’t see this but each group had a little task for the couple to complete in order to continue on (the soccer team made them score a goal or the snowboarding group had a snowboard that Jürgen had to saw in half and so on).  It’s really cool! We walked on and when we made it to the end, the couple was there to be congratulated.

Then we walked over near the church where cocktails were served: 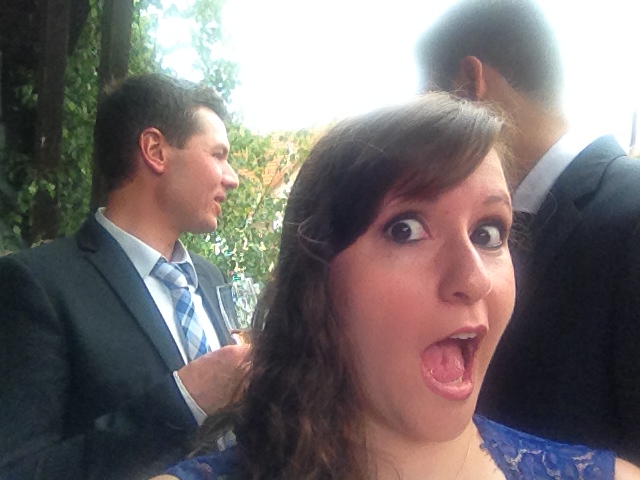 Thorsten and I were accompanied by T’s best friend (and brother from another mother) Marcel and his lovely wife, Nicola.

These two are wonderful people and the folks back home will probably have a chance to meet them.  Nicola and I have already discussed a trip to Indiana 😉

Anyway, I did manage the picture of the beautiful bride:

Then we piled into Thorsten’s beemie (BMW).  At the cocktail hour, we were given ribbons in the wedding colors to be tied to our cars.  This is a fun tradition where all of the guests (in their cars) follow the newly weds like the Jews followed Moses to the Promised Land (of booze and food and dancing).  The ribbons told anyone who watched the caravan drive by that this was a wedding procession and the drivers would honk and the we all waved to everyone as we passed.  This is a fun tradition! 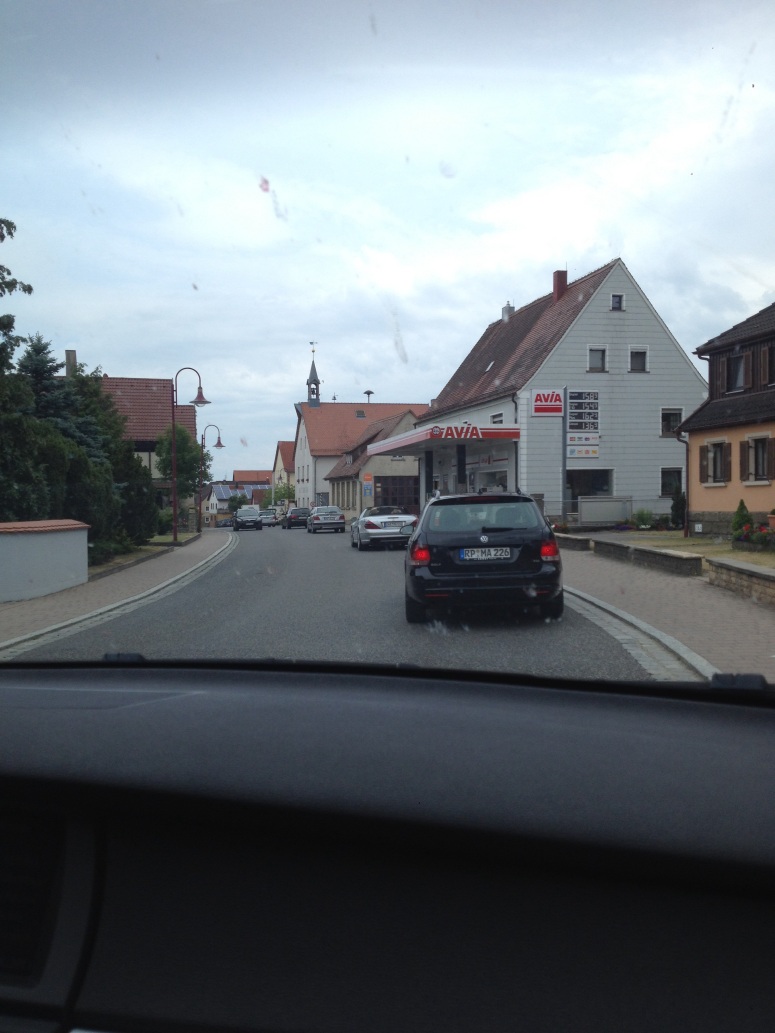 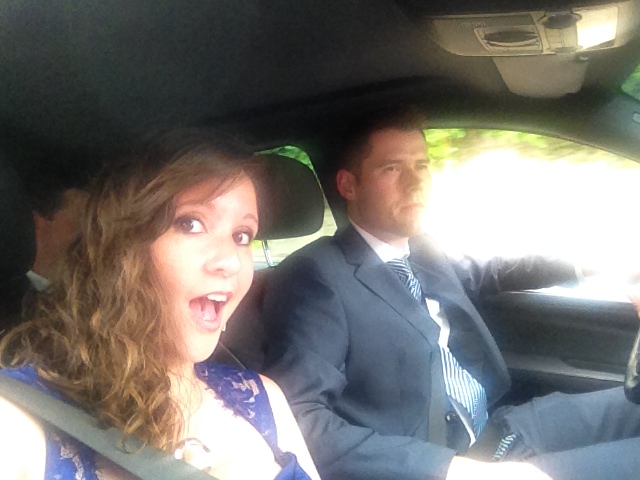 Finally we arrived at this quaint little place that was elegantly decorated: 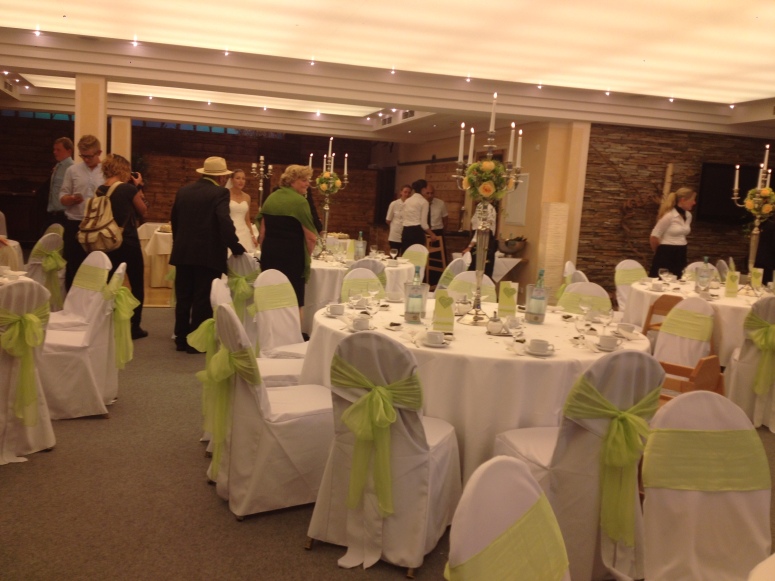 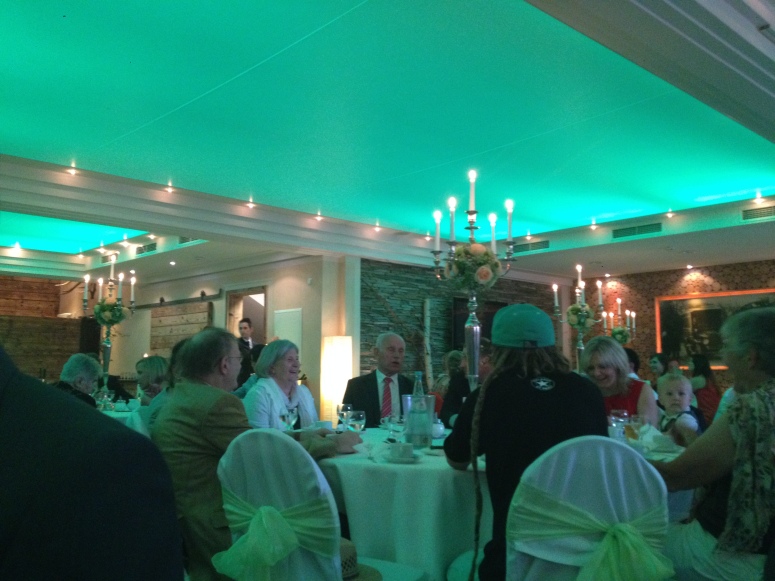 Then to be unconvential (and because it was time for it), instead of having dinner first….we had coffee and cake! Of course Germans know their cake!

Oh they didn’t have just one cake:

The gifts for the couple proved to also be so cool! 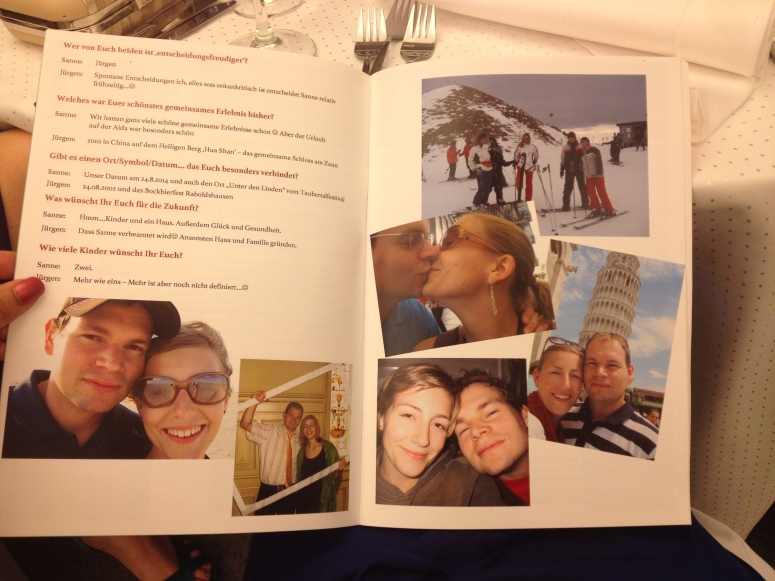 This is a magazine compiled by a many of their friends (Thorsten included) celebrating the couple.  Another friend, Björn, put coins and froze them in an ice heart that melted over the course of the reception freeing the money:

Then just more photos taken throughout the night.

2 thoughts on “My First German Wedding”