Today is Unification Day!  I know some of my readers will think this is an episode from Joss Whedon’s masterpiece ‘Firefly.’ It’s not.

For those of you who don’t know: ‘Firefly’ is a show inspired by Michael Shaara’s The Killer Angels.  It humanized both sides of the American Civil War (I actually had to read it in 6th grade….heavy stuff no?)

Anyway, ‘Firefly’ looks at the losing side (the South in this case) after a huge Civil War between the rebel Brown Coats and the winning Alliance (The North).  Both sides were brought back together and every year since celebrate Unification Day.

Today is the day that East and West Germany was brought together to create the Bundesrepublik Deutschland (or Germany to us English speakers).   It is an important day for Germans  because it reunited a country ripped apart by the aftermath of World War II.

But little known fact.  The Unification of Germany is symbolized by the tearing down of the Berlin Wall.  Represented by this famous images like this one: 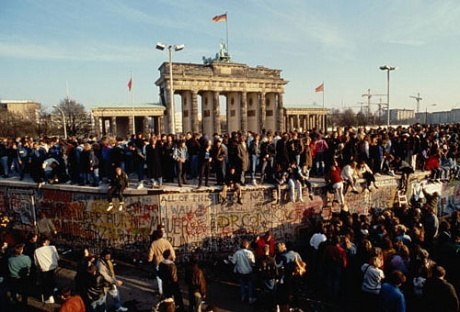 and also this one:

That’s right, The Hoff! With his lightbulb covered jacket!

Anyway, the fall of the Berlin Wall actually occurred on November 9, 1989.  So why is it October 3rd?

Well, October 3rd, 1990 was the official day of a unified Germany.  But they had thought to use November 9th since it was not only the fall of the Berlin Wall but it also coincided with the original proclamation of a unified Germany in 1918 as well as the defeat of Hitler’s first coup in 1923.

However, it is also the anniversary of the first large-scale Nazi-led pogrom of the Jews in 1938 (Kristallnacht).  Because of this instance in history, November 9th was considered an innappropriate date.

I actually got to see the remains of the Berlin Wall in 2007.  It was a very sombering experience:

So let’s celebrate German Unification Day with some The Hoff!!!