So this last weekend, I went on another ski trip with literally half the village of Brettheim (the village next to T’s hometown).  We were piling into a bus to make a day trip to Ofterschwang……

We left at around 5:30 am and I had planned to sleep….until they started passing around beer and sparkling wine. (P.S. I had the sparkling wine).

T and I did manage to sleep for a bit since it took about three hours to get there.

This is the view from the hut at the bottom of the mountain. Just a little further down is the ski lift to the higher slopes. The only thing that sucked was local rental shop.  It was soooooooooooo unorganized that it took us over an hour to rent a snowboard and shoes.  The majority of that time was spent just at the cash register because it was one guy, who also was in charge of renting helmets, goggles, ski classes, etc.  Also there were no lines….just a mob bearing down on the poor dude.  It was hell and people were pissed. Myself included.

Anyway, we got onto the bunny hill area to do a few laps and warm up my muscles. I was able to get back into the swing of things very quickly.  T then decided that we should take the lift up and try one of the hills. I am not sure how the difficulty levels of the slopes are organized in the states but here in the Alps they are as followed:

T convinced me that we would take a blue hill.  We rode up and caught the gorgeous site from where we stood!

Except we didn’t get a photo then….instead, I saw the slope we were actually going to take…….it wasn’t blue, it was red.

This may or may not have been the look on my face when I told T off haha. But he was sure that I could do it…..also the only slopes back to the hut were red or black so I would have to take it down at some point. 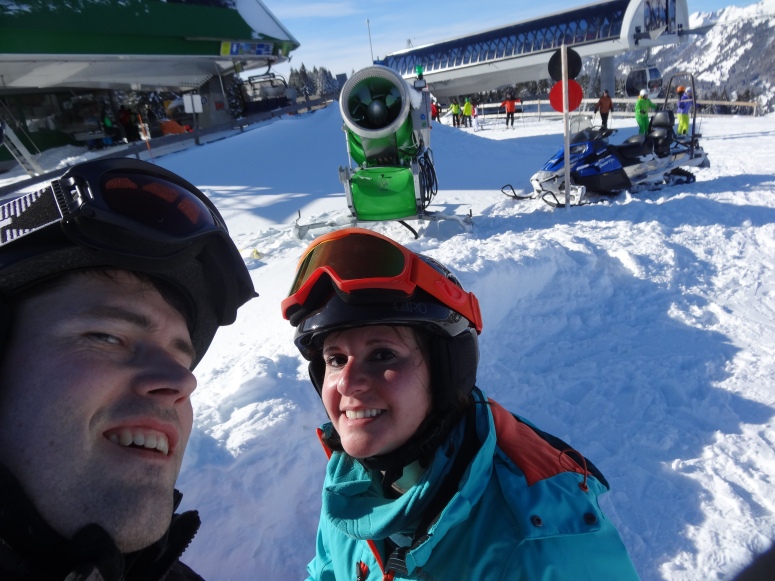 I panicked for the first few minutes, but my muscles didn’t fail me and I was able to then to work on my technique again. It was quite awesome.  My favorite part was the bar that sat halfway down the mountain….

Yeah….I totally grabbed one of those couches.  It was nice and toasty from the sun….I could have laid there all day.  But then I started to cool off and get cold, so it was time to continue our trek.

By the way, this was the route we took…..I made it until the last 1/8th where my legs gave out.  T decided that it would be dangerous to try the rest of the way because it was one huge steep hill where I would need those muscles to keep from epically wiping out the rest of the way down.

So I walked and took photos:

It was still a workout just to get down the hill.  I sent T on and told him to go play in the snow.  I ended up going back to the hut and hung out with our friend Björn whose knee gave out while he was snowboarding (he ended up having to go to the hospital when we got back because it was worse than we thought – but he’s ok! Just tore something but no surgery needed!)

We also took a table and started drinking…..we had a bus so we had a DD.

After such a day, I was exhausted, sore, but utterly thrilled.  When I walked down the rest of the hill, my legs were no happy with me but I was still strutting like John Travolta!

There will be at least one (if not two) more trips this season since T wants me to finish my so-called “learning cycle” this year so that I could get serious next year. Maybe by then my nephew will come out to join us!

Anyway, I am still a little sore in places but frickin’ high on life!

One thought on “The Bar Halfway Down the Mountain”