So at the moment, I am between trips. I was just in Spain last weekend for a wedding and I will be traveling to Milan next weekend. I could have written about my trip to Spain today but I wanted to take time and write something good about it. There are a lot of things I can write about this most recent trip but today I decided to go for something a little more light hearted, which also gives me time to write something more substantial later.

So what am I writing about?

You guessed it: Abner

Since moving to Germany, I have found that I could do so much more with him in the Land of Beer and Pretzels than back in the States. I was a little worried at first – you know, since he’s a pug and all and that breed is not necessarily known for athleticism. But this little one has proved me wrong again and again. He likes to travel and always manages to keep up. May 31st marked my first anniversary in Germany and I wanted to commemorate that (a little late) but writing about all the fun adventures Abner has had since moving here with me.

So I decided to do that as a fun list of things to do with your pug in Germany (because it’s safe to assume everyone in the world is either a pug owner or surely is need of a pug, right?)

Abner is rather tall as pugs go, but he still fit as my carry on in the first big flight from the States to Germany. Of course, he had to be able to stick his head out and see everything otherwise he was a very unhappy pug.

When flying with your pug, make sure you give him plenty of water (and have the crate lined with a puppy pad in case he has an accident). Also keep treats on hand. Happy pug = less stressful flight.

2. You can take them shopping

I took Abner shopping with my friend Jessie. Honestly, it’s like taking a very hyper toddler with you. He was so excited and wanted to smell everything. This made looking at clothes a little difficult. Especially when he was determined to come into the changing room with you – pervert….

But it was nice to not have to worry about getting back to him. Jessie and I were able to even go and enjoy a nice dinner.

3. You can hike the Alps with them 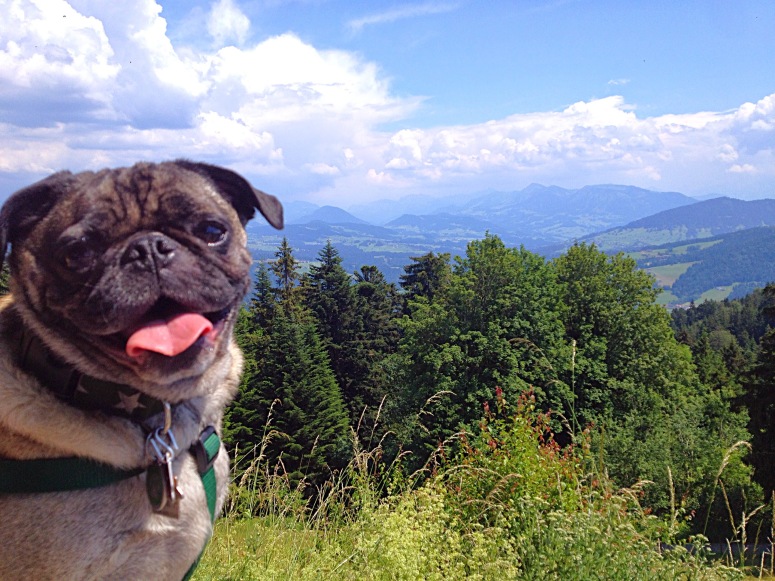 Last year for my birthday, we traveled to many places and did a lot of hiking – mainly in the Alps. It was T’s idea to take Abner with us and assured me that our little snort machine could do it. By gum, he did it! After hiking for several hours (made longer with frequent trips to keep Abner hydrated) – we made it to the top of Pfänder. Woo Hoo!

4. You can take them to the Lake 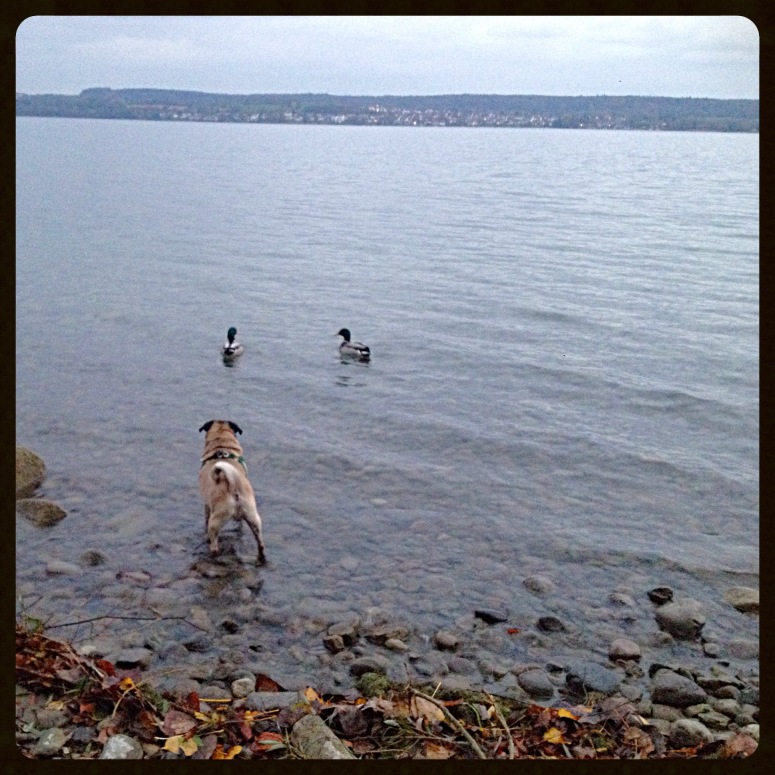 We live right next to Lake Constance. This means we can literally just hop in the lake whenever we feel like it. Turns out, Abner can, too. Granted not all the beaches are dog friendly – but dogs know not of these things called boundaries

5. You can hike up old ruins with them

Of course we are in Europe so this means there’s a castle on every block (or at least it feels like it). Each one as gorgeous as the next so there’s no stopping us – not even the pug! There was that day where be tackled both Hohenkrähen and Hohentwiel – then topped it off with a renaissance fair. That was such a delightful day!

6. You can take them to Disney Castles

Abner seemed to enjoy the old ruins – he didn’t really care much for pretty Disney-like castles like Neuschwanstein. I don’t know what’s wrong with him. He doesn’t get it from my side of the family. But it was a fun day just the two of us (T was off snowboarding with his friends).

7. You can take them snowboarding 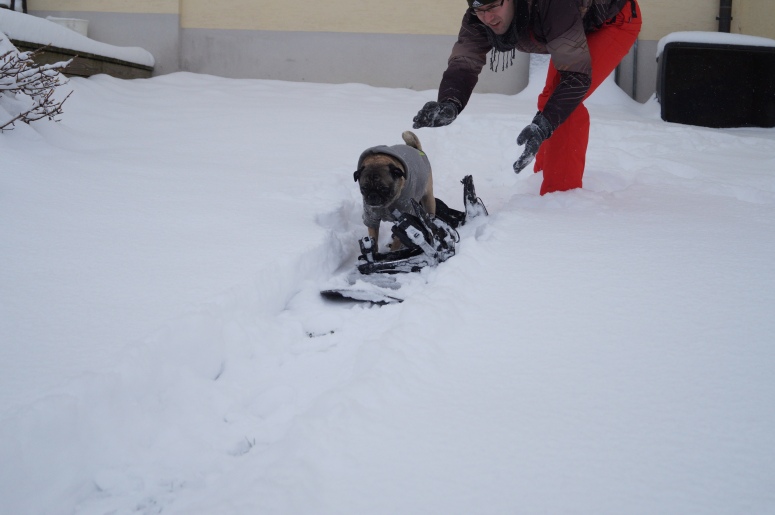 He actually likes to snowboard like this – someone holding him. We were trying to see if snowboarding was right for me by having me ride down the very tiny hill in the family backyard. Abner kept chasing me as I sped down and then tried to jump on me when I stopped. It took us a moment to figure out that he wanted us to pick him up. So T strapped into his snowboard, picked up the pooch, and I took this photo.

8. You can take them to the Flower Island – Insel Mainau (and they fit right in) 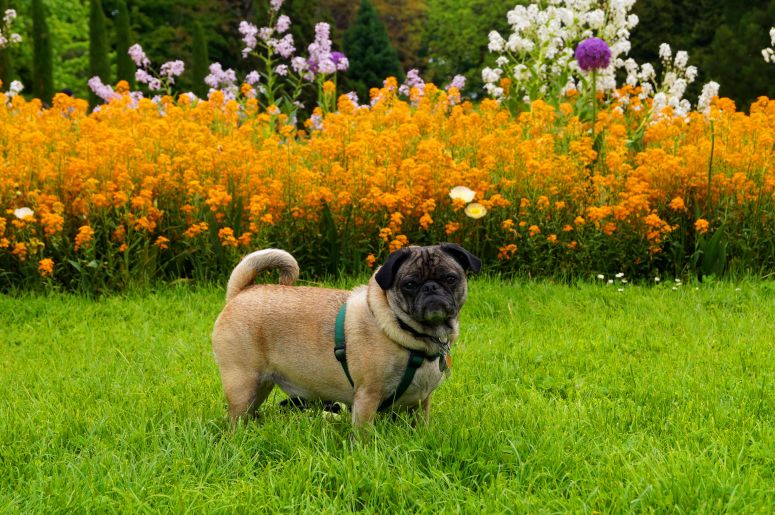 This is from a more recent post but taking him to Insel Mainau was a blast. Aside from my nose completely closing up by the end, the day was gorgeous. There were so many gorgeous colors around us and Abner finally figured out that if he stood still long enough for me to take a photo – he would get a tasty treat.

9. You can do photoshoots – because they are oh so photogenic… 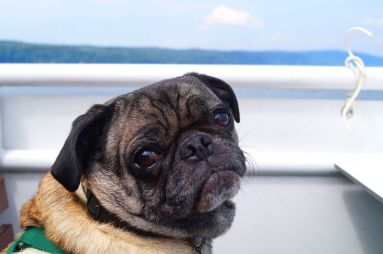 10. You can watch them sleep after such a trip 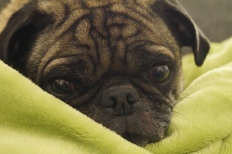 And finally, after a long trip – like any mother, it’s nice and quiet when the furbaby finally falls asleep from having such a big day!

11. Bonus: They are the best companion to watch Labyrinth with:

I love my dog. He has certainly made the last six years interesting. Adding T to our family has made Abner’s life that much better, too. T loves to be outside and to be active and because of him – Abner has been able to have so many wonderful adventures.

And we are just getting started….