No, I don’t mean Christmas.  Though, I did get the go ahead from the work and I will be able to come home for both Christmas and New Years.  But more on that later!

I mean festival season.  Back home, the Indiana State Fair should be nearing it’s end but here the towns are just getting started.  Around the end of July was Rutenfest in Ravensburg (where I work) and Seepromenadefest in Überlingen (where I live).

As always they were super fun.

This photo literally encompasses what Rutenfest is to me (good food and lots of drum bands).  This festival is only a ten minute walk from work so going here for lunch is easy and worth it.

Ravensburg is unique with these drum bands.  I noticed at my first Rutenfest that all the youths had weird hats with random stuff hanging off of them.  After asking the locals, I found that they were representative of the local drum clubs that Ravensburg has.  Apparently, it’s a big deal around these parts.

Überlingen’s Seepromenadefest is also a ten minute walk from my apartment (in the old city) so they also boast some good food and sites. 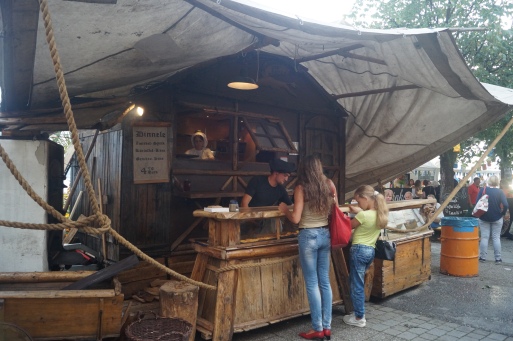 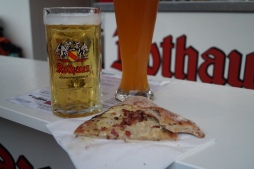 My favorite part of this festival (and they reappear during Carnival) is the Guggenbands.

Essentially a Guggenband is a club of brass players who perform mainly around Carnival time where they wear Carnival Masks.  The first mention of Guggen Players was in the 16th Century as the “spirits of winter” was blown away during Carnival with cow bells, whistles, and horns.  The first brass marching band to perform in Carnival was in Basel, Switzerland in 1874 while the term “Guggenmusik” was later coined in 1906.

“Guggen-fever” slowly took the area by storm where it is now insanely popular today in Switzerland, Southern Germany, Austria, and even in Italy!

Überlingen has two Guggen Clubs and they take whatever opportunity they can to perform and have even a battle of the bands.

I will leave you with this video I recorded from our most recent festival – perhaps around Carnival I can catch them in their more traditional garments.