As promised, I am going to tell you about our big hike in the Swiss Alps. As I mentioned in last week’s post, the hike was a wedding gift from a Swiss couple.  The gentleman is a co-worker of T’s and his lovely girlfriend is half-Peruvian (thus making her awesome) like me. I met them last year when we met up in Zürich to see the European Outdoor Film Tour.  It was super fun and we hit it off very well and have since met up for other film tours and I also went to their birthday (which I also mentioned in a previous post). Frankly, I am glad to call them friends.

For the sake of their privacy, the couple will be referred to in this post as MELO (if you knew their names…..it makes sense, I promise).

Now let me preface this by saying that MELO are experienced hikers.  How experienced? Like spending two months in New Zealand to experience culture AND climb Mount Doom experienced. Suffice it to say – it was made clear very quickly on this hike that I was the LEAST in-shape of the group (this group also included Abner).  But in my defense – I come from Indiana and only started this whole Alpine hiking business two years ago.

The name of this path was “The Five Lakes” Hike.  Essentially, while on this hike, we would be seeing five glacier lakes: Wangersee, Wildsee, Schottensee, Schwarzsee, and Baschalvasee.

So we were off.  We drove to Winterthur, Switzerland the evening before (since it was more or less the halfway point to the hike from where we live in Überlingen). We hung out with MELO, ate delicious barbecue, then went to bed so we could get an early start the next day.

Having to hold Abner on the Ski Lift. 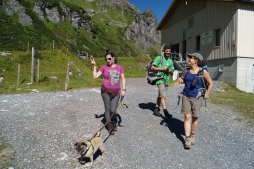 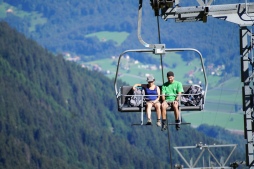 We took two trains, a bus, and three ski lifts to get the starting point – about 2000m (6562 feet) up near the town of Pizol, Switzerland. As we took the ski lifts, we saw a ton of swiss cows with their jangling bells as they echoed through the mountains.  I really wished I had recorded the sound – it made for hilarious background noise for our hike.

The first lake on our hike was Wangersee.  It was not far from the ski lift and was easy to get to. It was also infested with cows during the daytime as they used it to bathe.  Cows swimming = must see.

Then we really started our hike.  The first peak we had to climb was quite intense; we were required to zigzag our way up to a small valley between the larger two peaks of the mountain.

It was a lot harder and more intense than we anticipated but we kept on going and made it to the top (of this portion of the trek)! We were a little worried about Abner, but we knew there was the likelihood that he would need to be carried.  Fortunately he did not need to be carried the WHOLE time; but there were times that T decided to give him a boost.

The next lake on our tour was the Wildsee – it had such a gorgeous color!!!

But we still needed to get to Schottensee before we could take a lunch break!

The lake was so clear, you could see the bottom! It was also very clean much to the delight of Abner who normally only ever drank water from his water bottle. Now he got to drink straight from the source! It was on the other side of this lake that we took our break. MELO was craaaaaaaazy prepared with the amount of food that they brought for all of us; don’t worry, we brought some food as well. We had delicious sandwiches, eggs, chocolate (yay sugar!), chorizo, cheese, fruit, iced tea, and, of course, water.

From there, we continued on……up another peak.  This was much hard than the first one…but I think because either it was right after lunch or I really was not in shape (you choose). But we made it up so such a breathtaking view (see video below – it’s the entire first 30 seconds of it)!  But we still had two more lakes to go!

At the bottom of this peak was Schwarzsee. We found a couple of people actually camping down here – too cool!

But we still had one more peak to go!!! Ok, so thank god it was no where near as high as the first two and I was able to make it up with great ease! To our surprise, we found this super cool stone forest! See below!

It was literally down hill from here…..as in we kept walking downhill until the end.

It was gorgeous and breathtaking and wonderful! We are at about hour 5-5.5 when something happened….my shoe started to fall apart!

So there is a story behind these shoes.  Back when I was 12 – these shoes were a normal staple of fashion.  I wore hiking boots, baggy jeans, and big t-shirts (it was the 90s – don’t judge, it was a weird time of fashion for everyone).  I destroyed those shoes and my mom bought me another pair (the ones currently falling apart). At that point, I started to dress like a normal person and stopped wearing hiking boots. So they sat. In my closet. Since 1998. So while the shoes were hardly used, it’s safe to assume that the glue holding the soles together weren’t at their best (especially after about 5 hours of intense Alpine hiking). But MELO came to the rescue and with some surgical tape, managed to bind my shoe together.

Then we made it to our last lake: Baschalvasee

We took another short break here and then had to book it.  The ski lifts were closing at 4:30 and if we missed them, it would add another 3 hours to our hike (to get back to the bottom).  But then something unbelievable happened! My other shoe fell apart! With some more surgical tape, we were back on the road….but I looked hilarious on the way down:

We made it to the ski lift! However, we were very lucky because the ski lift folks worked an extra 45 minutes to make sure the rest of the hikers got back down.  And we were the very last group!

All in all, it was an exhausting but magical trip! Once my legs stopped being sore (about three days after the fact), I was already dreaming about another hike. Needless to the say, it was a wonderful and thoughtful present and you can count on us hiking with MELO again 😀

In the mean time, check out the new Abnerlicious music video below from the hike!

7 thoughts on “Abner and the Five Lakes”