In a hole in the ground there lived a hobbit. Not a nasty, dirty, wet hole, filled with ends of worms and an oozy smell, nor yet a dry, bare, sandy hole with nothing in it to sit down on or to eat: it was a hobbit-hole, and that means comfort. – J. R. R. Tolkien, The Hobbit (1937).

I was going to write my posts chronologically. But then I decided to hit more of the highlights first and then go back and do some reflection. While I could write about Auckland (which is where we started), I thought it best to write about something I know you have been dying to hear about: Hobbiton.

Peter Jackson’s Lord of the Rings movie trilogy was a huge part of my adolescence; my high school friends still refer ourselves as the Fellowship. It’s been 16 years since The Fellowship of the Ring first made its way to the theaters and Jackson’s vision still leaves me in awe. It was one of the big reasons why I wanted to come to New Zealand. I wanted to see this. I had to see this.

There are a few ways of getting tickets to Hobbiton. You can pay outright (but get there early, the tours fill up fast. We got our tickets around 12 for a 1pm tour but the long line after us found the the tours already booked until almost 5!). Or you can do what we did: get an Experience the Trilogy package. It includes Hobbiton, the Waitomo Glow Worm Caves, and Te Puia (the largest geyser in the southern hemisphere). There is also a super charged version (which is what we did) which included black water rafting at Waitomo and a steambox lunch at Te Puia….I will explain those in the next few posts.  Regardless, we got quite a bit more bang for a buck with these tickets. Here’s the LINK to the site for more info.

The site is located on a sheep farm owned by the Alexander Family in the town of Matamata. Peter Jackson had been hunting for filming locations when he came acrossed this bit of land as he was traveling by helicopter. When he landed, the first thing he noticed was that from inside this little valley, you couldn’t see a single relic that suggested mankind was anywhere near it: no telephone poles, no buildings, no wires, nothing.

After getting the ok from the Alexander family, Peter Jackson, with the help of the New Zealand army, began building their set. Hobbiton takes up 12km of the 1250km farm (so like 1%), but it did have to be fenced in to keep the sheep from wreaking havoc. At the time, it was only untreated timber, ply, and polystyrene. It was not meant to last. After filming was completed, they started tearing it down but a storm halted their efforts and some of the remaining hobbit holes simply stayed. There was a lot of interest and the Alexander family were getting constant phone calls from people who wanted to visit. Of course the family had no rights to the site even though it was on their land, but they talked with New Line Cinema and Peter Jackson and they came to an agreement and began hosting tours in 2002. In 2010, Jackson returned to film The Hobbit Trilogy and then took the opportunity to rebuild Hobbiton as a permanent set. There are now 44 Hobbit Holes that you can visit (before there were only 37).

Needless to say, I was fucking excited when we pulled up to the visitor center. You see, you can’t drive to the set. It sits well into the farmland that you have to be driven there by bus. I recommend either coming early or booking ahead, the 2-hour tours fill up fast. Anyway, we got our tickets, grabbed some second breakfast and then we were on the bus and within ten minutes we were there! I saw it all! Samwise Gamgee’s House, Bag End, The Green Dragon – but no Hobbits. Alas.

But what I did get was quite a few anecdotes from our guide (who was one of the original 4 from 2002) about how much Jackson not only loved Middle Earth, but all the details he took care in embedding to make the audiences enjoy their journey through the Shire as possible.

The fruit was so plentiful that young hobbits were nearly bathed in strawberries with cream; and later they sat on the lawns under the plum-trees and ate, until they had made piles of stones like small  pyramids or the heaped skulls of a conqueror, and then they moved on. And no one was ill, and everyone was pleased, except those who had to mow the grass.  – J. R. R. Tolkien, The Fellowship of the Ring

I read the trilogy when I was fifteen.  To be frank, I don’t remember this line at all. It’s a small detail in enriching what was life like in the Shire at this time. Which is cool, but of course Jackson took it a step further. He decided that Hobbiton had to have plum trees. But not just any plum trees – Hobbit-sized! Of course those don’t exist so he took young apple and pear trees, stripped them of leaves and fruits and had his people manually tie plums and plum tree leaves onto the branches. Of course any shots of these trees in the films were left on the cutting room floor, but damn it there were plum trees!

Ok, so the name I got from this comic from The Oatmeal (LINK). The point is, Peter Jackson brought an American eagle to New Zealand. Why? Every morning he would have the bird fly around the set to scare off any native birds in the area (there are A LOT in NZ). He was worried that something like a Tui would find its way into a shot and pull the viewer out of the fantasy. I am sure seeing a Kea would have done that to me.

More on you later, Kea!

Peter Jackson had people hang the Hobbit clothes every morning and take them down at the end of the day. He made them do this because they would eventually create a path between the Hobbit Hole and the clothes line. He wanted to give the impression that real Hobbits did come out of their holes on a regular basis to hang laundry. Did you notice that detail when you watched the films? I sure as hell didn’t but it’s cool to know it’s there.

The plum tree wasn’t the only fake plant in Hobbiton. The oak above Bag End was a recreation of another one growing near Matamata that had been cut down. The Bag End oak was made with steel innards and artificial leaves. They pulled out one of the branches so that you could see the innards as you approach Bilbo’s home. It’s an impressive tree.

This is not so much an anecdote from guides but of mine. The Green Dragon Inn was built for/after The Hobbit and now serves as a short rest stop after your tour where they provide you with a free drink (cider/lager/punch). There are talks of enlarging the kitchen that serves the inn but everything happened so fast that I didn’t even see where the kitchen would be. 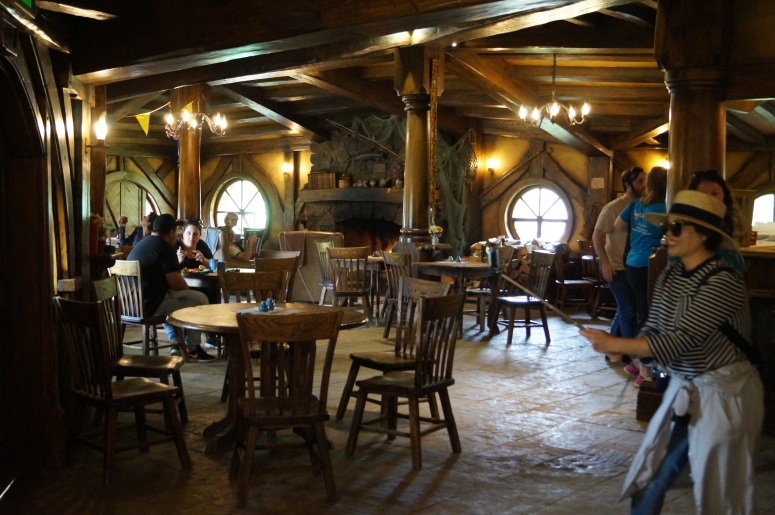 Anyway, it’s an item on my bucket list that I can definitely check off. I am so glad that I finally came here. I remember spending all night downloading the original trailer back in 2001 just so I could watch it over and over again. If someone told me at fifteen that I would see the place for real one day, I would have told them they were crazy (before scurring home to watch the trailer again for the millionth time). But here we are.

Anyway, I will leave you with some more photos from Hobbiton.

The Home of Samwise Gamgee

Look! We are Hobbits!