Happy New Year, everyone! Did you guys have a good celebration? T and I just stayed in since I had to work on the 1st (boo!), but anytime with T is time well spent.

My parents went to a wedding last June in the Philippines. The groom worked with my dad (thus the invite) and he took the opportunity to take my mom and show her where he had been spending the last several business trips. They were there for about two weeks and during that time they met a lovely Kiwi couple who were breaking up their trip from Croatia back to New Zealand. My parents make friends quite easily so of course they befriended the couple. They even offered to look out for T and I while we were in NZ. So my mom handed me J’s address (we’ll call them J and R here) and I got a hold her and we made our plan.  They invited us to their house near Hamilton (close to Hobbiton) as well as their beach house in Hahei.  I didn’t know what was in Hahei so I did a bit of snooping and found that it was the home of Cathedral Cove…..yes, Narnia’s Cathedral Cove:

Of course I am also a fan of the Chronicles of Narnia and it’s not surprising since Lewis and Tolkien were friends. Anyway, I showed T a photo of Cathedral Cove and he said, “Yeah, I think we need to go there, too.”

We met J and R after hanging out at the black beaches of Raglan (the day before we went to Hobbiton). We got to see their lovely new home as they fed us wine and cheese and lamb and asparagus and oh man we ate so much!

The next day, T and I went to Hobbiton with the plan of meeting J and R at their beach house in Hahei. I have to say, Hahei is gorgeous. 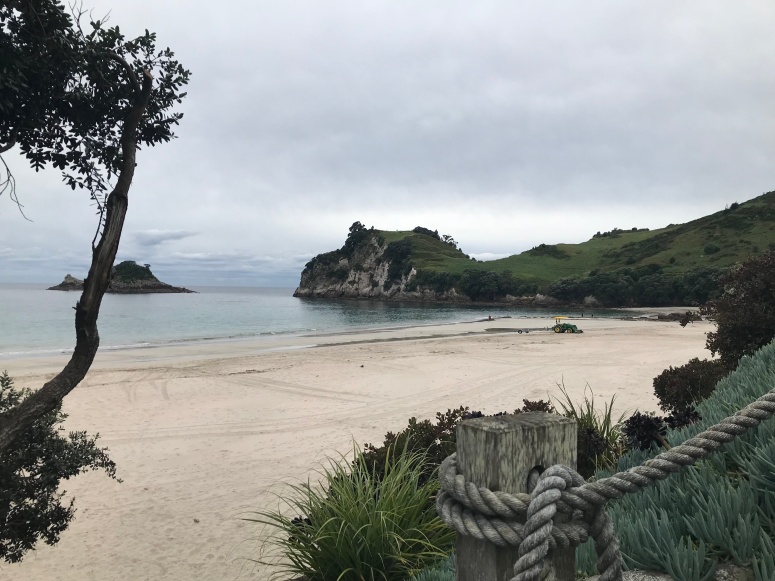 Their house was barely fifty feet from this view.  Oh yeah, and that tractor in the view? That’s how they put their boats in the water. Cool, no?

Anyway, the weather was the best while we were there; it rained a lot. But it was still beautiful.

The next day, J drove us to the start of the path that led to Cathedral Cove (and we walked back to the beach house). 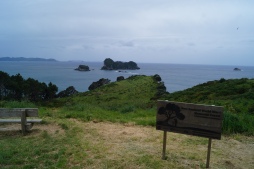 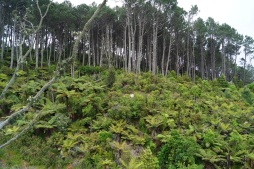 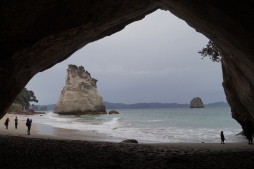 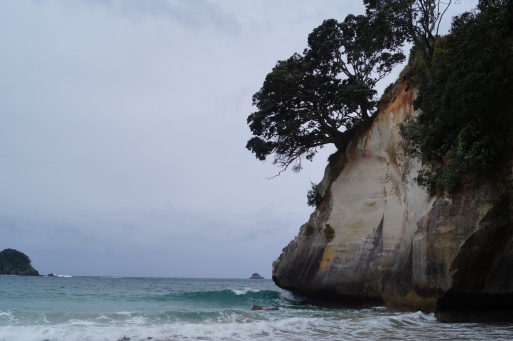 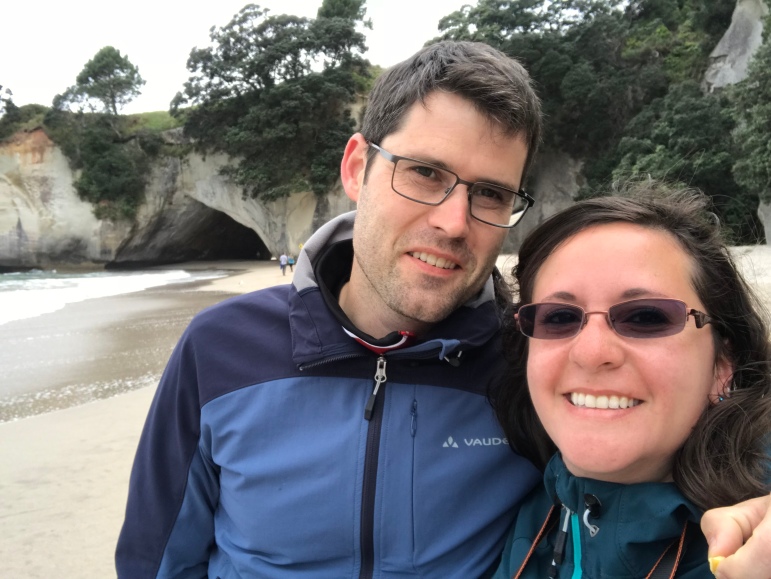 Considering that it was both bad weather and still spring, there were a lot of tourists that came to visit the cove. They keep the location hard to get to on purpose; it helps control the number of tourists that come. Hahei is a small sleepy town and the locals like to keep it that way. I don’t blame them. I can only imagine how inundated with tourists this place can be in the summer. Yet another reason why we are glad we traveled in November.

Being in Hahei really did feel like I was on an alien world. It’s nothing like anything I have seen before. The next day, before we had to start our drive to Waitomo, J and R took us to another Maori site known as Te Pa.

A Pa is a fortress and outside of Hahei is a small little peninsula that the Maoris used when they needed to evade an attack. The one in Hahei is called Te Pa (the “Te” at the beginning of the Maori words simply means “the”). Obviously there is no longer a fortress there, but the land formation still is. You can imagine where they would build walls and there’s only one path up, making it easy to protect. 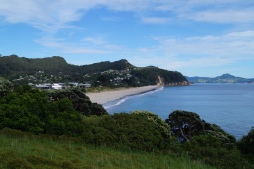 While most of my trip to NZ was straight out of a Tolkien novel – here, I truly felt like I was in Narnia.

J and R were such lovely people. I would love to visit with them again if only NZ wasn’t so damned far away! Luckily their daughter (who’s my age) currently lives in London and there’s a chance they will be Europe sometime in the near future and they already know that they have an open invitation at our place 😀

Now I am trying to convince my parents to go to NZ, I know they will love. As would the rest of you.

Enjoying our trip so far?