You would think that our big 19km hike around Mount Doom would have been reason enough for a day of rest, right? Wrong. No, I had the brilliant foresight to schedule a mountain bike trail after that.

In case you weren’t aware, T is an avid mountain biker. He believes that you can see more impressive sites on a bike because you are faster than just walking but the bike is small enough to get to places that you can’t with a car. Me? I don’t have the stamina. But T fixed that by getting me an electric mountain bike last year so now I can keep up with him. I definitely agree with his opinion. Together we have discovered so many cool things around Überlingen by bike that we probably wouldn’t have seen with a hike (and definitely not with a car).

T wanted to do some mountain biking while we were in NZ, but he kept saying “if we have time.” Unfortunately there was never enough time so the day before our hike we went to a local bike shop and made an appointment, it threw our time table off (only slightly) but I knew that if we would only squeeze it in “if we had time,” then we wouldn’t get to it.

The owners of the Mountain Bike Station recommended that we do the Old Coach Road. The road was used by horse drawn coaches in the early 1900s as a way to transport passengers between two stops of the (at the time) unfinished North Island trunk line. Of course once the railway was completed, the path was no longer used and was literally consumed by the forest for about 100 years. The path runs from Horopito back to Ohakune and takes 2-3 hours (or you can hike it but it takes 5).  It is also part of a larger over trail (The Mountains to Sea trail).

I am going to tell you right now: thank God for ebikes. T was still feeling the soreness from our hike the day before (of course so did I), but we had committed to this! We were going to do it!

The owner of the bike shop warned us that the cobblestones didn’t make for smooth riding and he wasn’t wrong. Holy crap did I feel my brain rattle around! But the view way worth it! 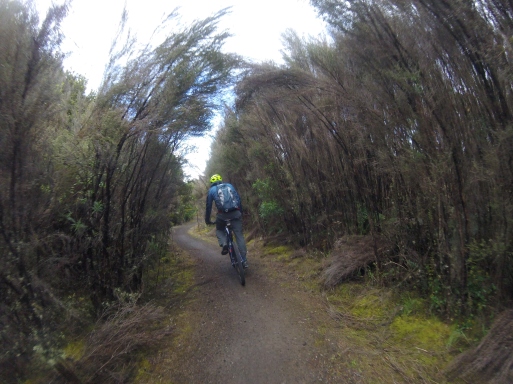 Of course T had to be a rebel 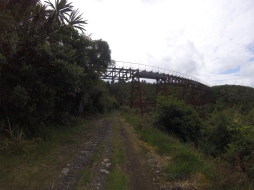 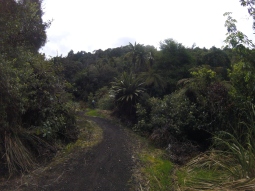 I was very grateful that I brought my GoPro with me. I was able to take some awesome still photos (as well as some video) throughout the ride. It’s totally worth it if you find yourself in the area – it felt like we were in another world!

Anyway, I have a video all ready to go but YouTube is not playing nice right now so I will have to upload it later.

For you mountain bikers out there: what are your favorite trails?