While my goddaughter came to visit in January, we made a pilgrimage to Esslingen where we could get a personal tour from fellow expat and darling friend, Ami im Schwabenland.

Esslingen am Neckar sits just outside of Stuttgart and was a free imperial city for several centuries until it was annexed by Württemberg in 1802.

Esslingen is known for its University of Applied Sciences. My brother-in-law attended there and has, in the past, regaled us with tales of his Kandelmarsh. What is that? It is a bizarre and unique tradition of the university. There is an old, ritual parade through the city conducted when students complete their degrees. The professors lead the parade in old-fashioned horse carriages with the students following behind on foot, dressed elegantly in tailcoats and top hats – and with a mug of beer in their hands. After the diplomas have been handed out in a special celebration, notes from lectures and seminars are burned, the students set out on a tour of the city’s bars and pubs. They are allowed to drink as much as they want for free on this special evening. 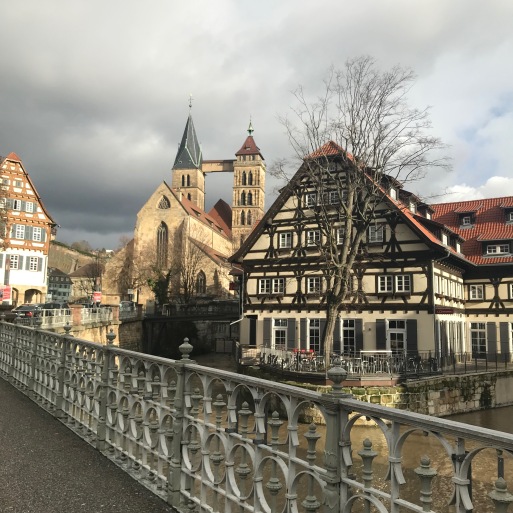 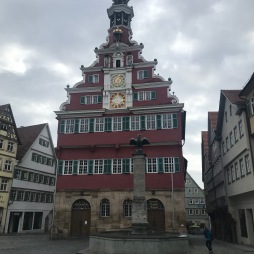 It was really fun to go through the city with Ami – I knew it was one of her favorite cities and I can never pass up getting a personalized tour. It was actually one of the reasons I studied in Spain in college for my history requirements. I am always more interested in history when there are things to experience first hand.

If you are interested in learning a little bit of weird historical secrets of Esslingen (and can read German), then I recommend that you read Esslingen: Geheimnisse der Heimat (https://www.amazon.de/Esslingen-Geheimnmisse-Heimat-Geschichten-Geheimnisse/dp/3981556453). There they answer to such questions as:

Why does Mary have six toes on the altar in the city church? What about the strange stone constructions in the vineyards? Why are there white lines on the walls of St. Paul’s Cathedral? And what about a murder that wasn’t actually a murder?

You know – the important questions.

One of my favorite stories is about the reason for Mary to have six toes on the altar in the city church (St. Dionys, if you’re wondering). As a Catholic, this story really tickled me. You see – St. Dionys is actually a protestant church. That meant an image of Mary, in general, was a no go. I mean, there’s no problem with having images of the disciples but what about the woman who birthed Christ and raised him? Not even an ounce of recognition? I have serious qualms about the mother of Christ being treated as simply an incubator. Ugh, just ugh!

ANYWAY, when the altar was commissioned for the church, there actually came an opportunity to have Mary painted. I don’t actually recall what the image was supposed to be of, but the protestants had to make sure that Mary was not going to be made into someone who could be worshiped (I mean fuck the 5th commandment, am I right? (Honor thy mother and thy father, for those keeping track)). So they had to make her imperfect, give her six toes! I am sure if they would’ve given her a second head if they could. But they had to settle for giving her six toes and thus cementing her as imperfect! Phew, those protestants dodged a bullet there, right?

As a modern day, sane person, it’s amusing to look back and see such backward thinking. It makes for a great story and a fun scavenger hunt item if you’re interested.

Unfortunately, I was so engrossed in the whole story, that I didn’t actually get a photo of the famed six toes. Alas, I guess that means you’ll have to come and see for yourself, right?

What favorite historical tidbits do you love about where you live?

In the meantime, if you follow me on Instagram, Twitter, or Facebook – you probably already know this. My novel is a space opera called The God Queen. It’s currently with its editor – but in the months leading up to its release, I plan on giving you guys little peeks… If you want a behind the scenes peek, then sign up for my newsletter! Just click the subscribe button below!