I apologize tremendously for falling off the face of the earth for the passed few weeks.  Between playing Travel Agent for the family, wedding planning, and being home sick from the plague (i.e. the flu) for pretty much the whole month of February – some projects were just put on the back-burner.

But fear not! I have returned with a hilarious Abnerlicious adventure for you guys!

A few weeks ago (while on the tail-end of my sickness), T wanted to do a weekend trip to Switzerland.  Why? Well, usually we go to Austria for our Alpine Adventures and he wanted to see what all the fuss was about.  He also wanted to give me an opportunity to try more snowboarding.

How did I do? Definitely getting loads better, but our story focuses on Abner.

You see, we still had to organize having Abner with us.  T found a lovely hotel that allows dogs; unfortunately we couldn’t check in until 2pm and then check out again before 10am the next day.  Essentially snowboarding was only limited to between Check in and 5pm.  Blargh!

So we had to do something with Abner!

So we were in the town of Davos, Switzerland (yes, Game of Thrones  fans – just like our beloved Davos Seaworth!).  We decided to walk around a little and ended up on the bunny hill where I warmed up.  We joked around and had Abner pull me on my snowboard… 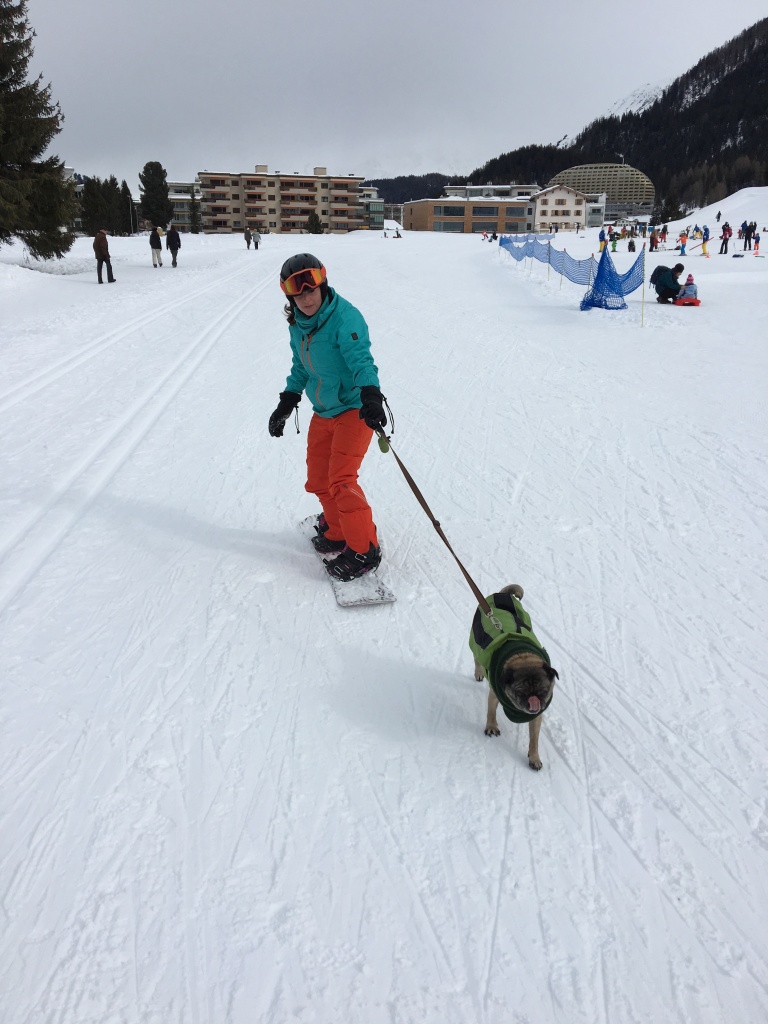 Don’t worry, no pug was hurt in the making of this photo.  But we did get a lot of laughs from fellow skiers. He could actually get some speed going.  Good times.

Anyway, T made the mention of taking the bus to another end of the town to check out a hotel that was high up in the mountains.  So high – that it requires a rail car to take you up! The name: Schatzalp.

It was super lovely! Unfortunately the day was rather cloudy and snowy so we couldn’t see the valley very well.  Next time, I guess!  Before we took the rail car up, I noticed that T had rented a few sleds.

I have to be the first to tell you that I was kinda “meh” towards these sleds.  Where I come from (the hilariously flat lands of Indiana) – I had this pink sled and I loved to ride in as a kid.  For me, these old wooden ones from the era of Orson Welles was too old fashioned.  I didn’t have faith that these could have the same ability of speed as my little pink plastic one. 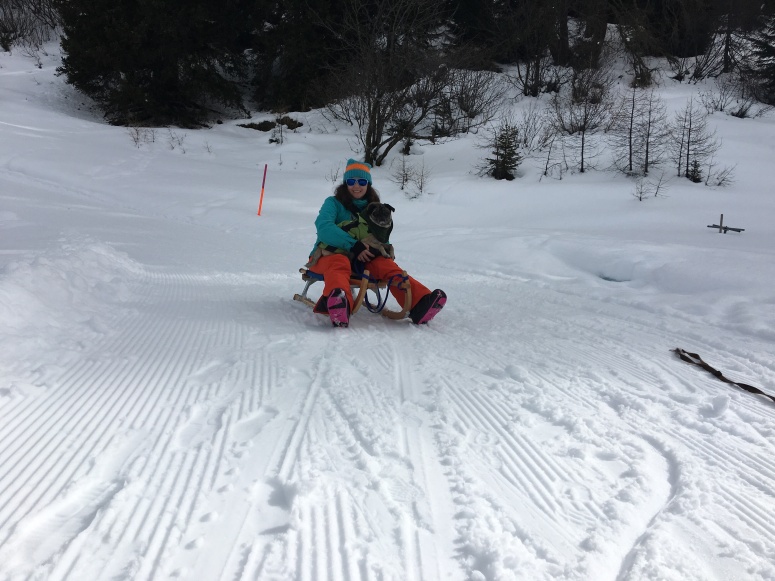 After doing some wandering up the mountain some more, we decided to not only try the sleds – but also see how well Abner did on them.  Some of you may recall last year, when I was first playing around with the idea of snowboarding, that Abner kept chasing me down the hill.  We quickly learned afterwards it was because he wanted to be held as someone rode down the hill.

So why not a sled?

We tried riding down the side of the mountain from the hotel back to the bottom of the valley.  This was nothing like sledding down the hills of Indiana!  It took me a big to get the hang of steering but I quickly learned the value of riding down a sled like Citizen Kane’s Rosebud….I loved it!

How did Abner fare? Well, to be honest – he wasn’t all too keen at first.  Although, I think it was a combination of T going rather fast and me (not going fast enough) getting left behind so Abner couldn’t see me.  He’s not a fan of that.

By the time we made it down the mountain, it was time to check into the hotel.  So we got him inside, dried, warmed, and fed, and then we hit the top of one of the mountains!

I survived and by the end could finally perform turns on a snowboard.  I still need work but every time I am on the slope – my self confidence only grows 😀  Unfortunately, I was pooped after one slope (especially after hiking/lugging around my snowboard and walking in low oxygen most of the day) and I wanted T to do some harder slopes.  He so patient with me, doing all the “boring” slopes with me.  I didn’t want to deny him his own level of fun.  If I had really pushed myself, I think I could have done the slope again but the slope was already closed and the only ones open were the black ones (the hard ones).  So T got to ride his slopes while I drank a super expensive Swiss coke in a warm hut ($6 for a Coke – ouch!)

Anyway, we got back to the hotel, and ate an amazing hot stone steak.  What the hell is that? It’s a essentially a medium rare steak cooked on a hot stone and served to you.  If you want it further cooked – then just cut a piece and lay the raw sides on the stones for a few seconds and BOOM you piece is well done. 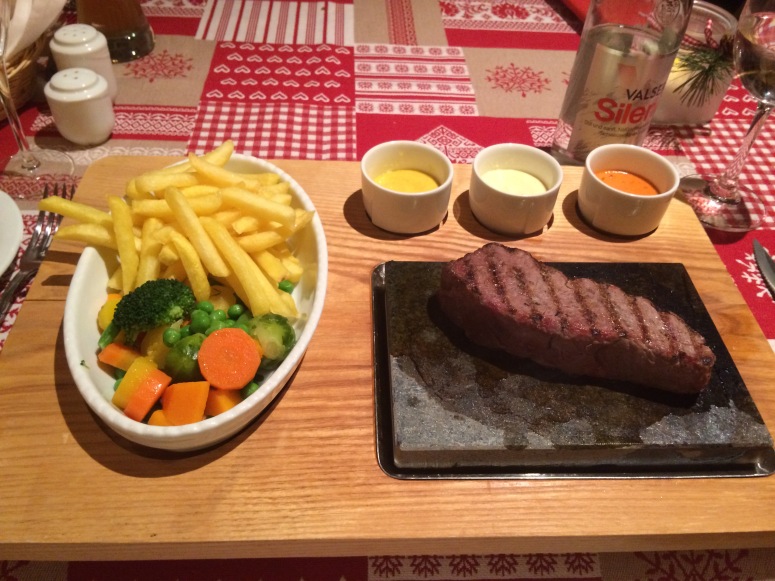 FYI – it was here that we learned the big difference between skiing in Switzerland versus Austria – the food.  This puppy will set you back about $50 a piece but it is literally worth every juicy penny!  After stuffing our faces – we walked around as snow fell all around us:

We went to sleep only to start a new day!  Sunday was much sunnier and warmer.  We decided to head up to Rinherhorn to try some more sledding.  Overall Abner had a lot more fun this time.  It wasn’t as cold and we took the walking path with the sleds (the slope reserved for sleds was really steep and full of people so we went for “literally” the road less traveled for our pup’s sake).  We were able to control our speeds better and let Abner off his leash.  He relished the freedom.

And to top off this post – T and I worked together to make a video of Abner’s Adventure. It’s the first of what I hope to be more Abnerlicious films on our YouTube Channel.

Anyway, I will see you all next week and in the meantime – here’s our video!

2 thoughts on “Abner and Rosebud”