So this ended up not being our ship, but you get the idea

turns out we weren’t the only ones with this idea

So T had mentioned before that one of the things he wanted to do while we were in NZ was try his hand at Kite Surfing. Last July, my parents and I put our funds together to get him introductory lessons in Kiwi-Land. He was super excited. I did a lot of looking around for prices and possible schools. T did as well and found that one of the best places to go was in Nelson. We found a delightful company owned by a married couple Warren and Wiebke and in case you couldn’t tell by the name – Wiebke is German! So not only did T get his lessons (only two days since that’s all the time we had – but he is already halfway through what he needs to be allowed to kite surf solo) but he also got to have them in German! Not that it really mattered since his English is fantastic, but I thought it was a nice touch.

The company is called Kitescool Kitesurfing School and we highly recommend them. If you look at their google ratings, there is a 1 Star rating. We asked the owners about it and it turns out that this asshole (my word, not theirs) took classes at the other kite surfing school and was just being an ass (again, my word, not theirs – they are super professional). Be aware that you need to dedicate a few days but if you want to try it, these folks are great! Of course, T is a natural and took to it like a fish to water…..unfortunately the wind wasn’t the best but he still managed to make the most of it. 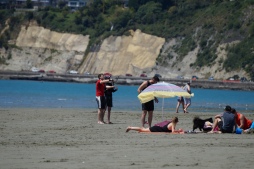 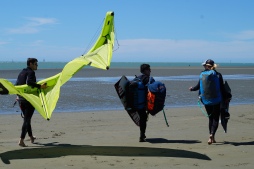 To say that I was a proud wife is a bit of an understatement. I was really glad that this worked out for him. Of course I want him to finish getting certified, but that may mean heading to Spain to finish his training. Oh darn, right?

I know what you’re probably wondering…..what was I doing the whole time? Sunbathing and reading…..of course taking this photos and watching the hubby with pride. Kite Surfing is not on my bucket list and the courses are pretty pricey anyway. I rather put all the money for T to get the most out of the classes than splitting it so that I can be here. It was worth it.

Nelson itself was quite small and lovely. It was super sunny and warm so I enjoyed having those days to just read and relax.

What about you? What do you have on your bucket list? Mine was climbing around Mt. Doom and visiting Hobbiton. But I have since added other things while we were in NZ.

Tune in next week when I talk about Abel Tasman National Park! Until then, here’s a video of T showing off his surfing skills.

#throwback to #husband learning how to #kitesurf in #Nelson #newzealand #middleearth